It's deep into the third set of a match that most fans never expected to even be close. After racing through a routine first set, Rafael Nadal has been getting all he can handle from American qualifier Tim Smyczek. Though Smyczek has produced amazing tennis—especially given the gravity of the situation—Nadal has looked out of sorts since midway through the second set and had the doctor out earlier in the third. But now he has a chance to serve for the set at 5-4, putting this match back on track with a two sets to one lead. Nadal tosses his towel to the ball boy and collects the balls so he can try to serve out the set, but it's plain to everyone that the Spaniard still isn't feeling quite right. He wanders towards the back of the court and leans over the on-court sponsor signage. From the other end of the stadium, it's impossible to tell if he just spits or vomits. Either way, it's a scene that's reminiscent of the 1996 semifinal in New York when Pete Sampras vomited during a five set battle with Alex Corretja.

After a moment, Nadal collects himself and steps to the line; he's as ready as he can be to try and serve out the set. Nadal and Smyczek battle back and forth and eventually, Smyczek plays a perfect drop shot to earn two break points. The crowd hums nervously, anxious to see if the American can break back and even the set at five games all. He doesn't even have to play a ball, as Nadal double faults for the third time on break point to gift Smyczek the game and let him back in the set. 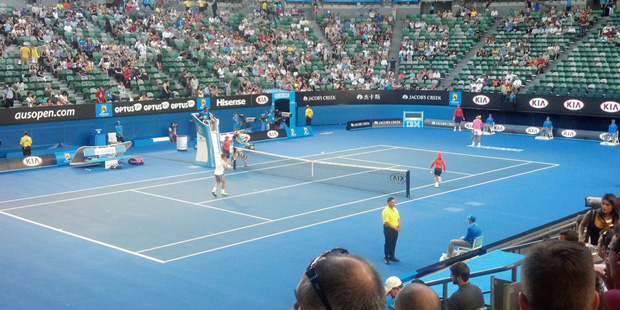 Both players hold serve and the crowd ratchets up the volume as the players prepare for a third set tiebreaker. The older guy next to me repeatedly leans forward, shaking his fist and muttering "Come on, Rafa," but his exhortations don't help; Smyczek cruises through the tiebreaker seven points to two and grabs the third set. The crowd goes crazy; most of them urging Nadal on, while others smell blood in the water and cheer for the upset.

Of course, everyone knows by now that Nadal did stumble his way to a five set victory, sending Smyczek off the court to a well-deserved standing ovation. And everyone knows that Nadal crashed out a few rounds later in a mostly uninspired performance against Tomas Berdych. After all, it is nearly the end of the tournament, so why bring up a second round match at this point? Well, I just wanted to take a little time to share some of my wonderful experiences at the Australian Open as I got my first taste of live Grand Slam tennis during the first week of the tournament. 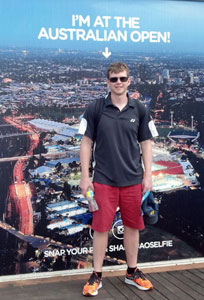 Yup, you read that right: my first taste of live Grand Slam tennis. Even though I've been a life-long tennis fan, and I live about three hours south of New York, I've never seen any Grand Slam tennis in person. I have seen matches at other pro tournaments, so that's something I guess, but in comparison now, I'll admit that Grand Slams have an entirely different feel. 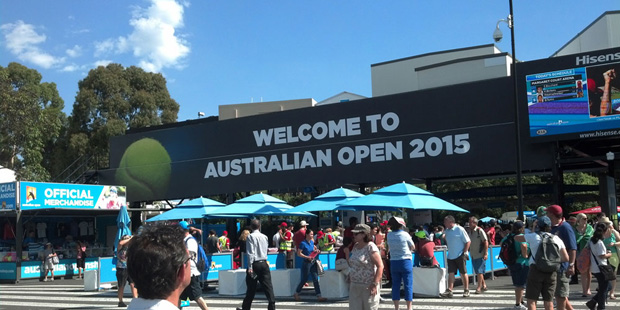 While I would have been pretty happy to spend most of my two week trip staying in Melbourne and watching tennis, my wife had some other items on her Australia checklist and, to be fair, I did too. It's hard to justify 24+ hours on a plane travelling to a place that's literally on the other side of the world and then doing nothing but watching tennis. So, while most of our two week trip was spent touring around other parts of the Australia—and sweating profusely—we did spend three great days in Melbourne and had a chance to attend two night sessions of the Open. 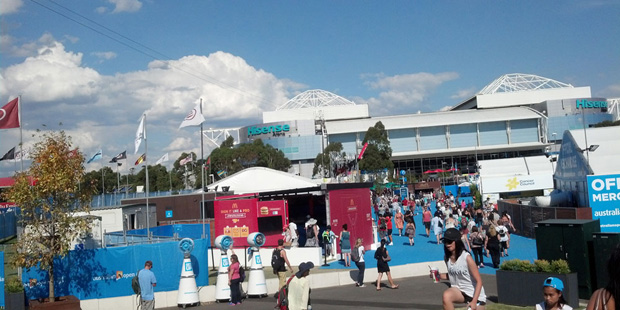 It's amazing how engaged the whole city—really the whole country—is with the tennis. Commercials on Australian TV for tennis are sort of like American commercials touting blockbuster football matchups. Buses are plastered with wraps encouraging fans to "Get Closer to the Action," and Federation Square—a fair-sized public plaza sitting just outside of Melbourne's downtown area on the Yarra River—is turned into a second Australian Open headquarters. Official merchandise and tickets are sold, tournament sponsors have tents set up, and tennis matches are shown on the Square's big screen TV. While Federation Square seems like it's always bustling, it's incredible to see so many people gathered around to share some tennis while enjoying a hot, sunny, summer day. 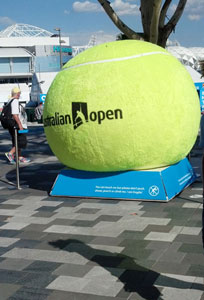 And the tournament venue itself, at Melbourne Park, is just as exciting. There are so many people crammed into the grounds that there's always a dull roar of voices—especially as people line up and wait to get in. The only place you'll find real quiet is in the stands during points, before the crowd erupts again at the end of a spectacular point. Aside from a few out-of-the way places on the grounds, there's really no moving around quickly from place to place, but it's really a blessing to just stroll slowly through the grounds, enjoying the atmosphere and trying to decide which match to see next. 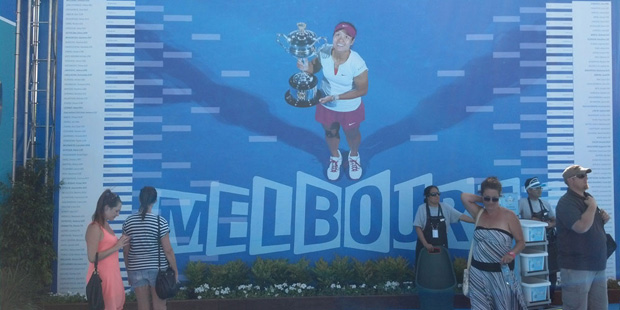 I still have trouble believing I was there, especially now that I'm back home watching the coverage on TV. The tournament grounds—and the whole city of Melbourne, really—just have an unbelievable buzz and excitement about the event. If you're a Grand Slam holdout like me, all I can say is that you should take the time to get to a Slam and enjoy some tennis. I can't speak for the other Grand Slams (yet), but I can say that seeing the world's best up close in Australia will give you a whole new perspective on the game, as a fan and a player!