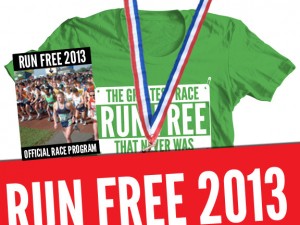 We've all been told not to believe everything that we read or see on TV. You would think that not believing everything we see and/or read on the Internet is a given.

While arguing with someone over the validity of using Wikipedia as a source I once was told that "if enough people believe something it becomes real." Yeah. I wish I was joking.

The "fake until it's not" marathon is put on by Ridiculo.us, a group of people who would have probably hung out with Marcel Duchamp and Andre Bertrand, were they breathing back then. Why put on a fake marathon? As an experiment into how many fake photos, Facebook updates and Tweets it takes to make something "real."

They've even set up a Kickstarter Project to fund the Run Free marathon. For donations ranging from $10 - $100, you can get your information packets, race big, T-shirts and maybe even a medal. A Kickstarter project which has already raised $23,098 (5% goes to Kicking it Forward). There are over 800 runners participating, or not participating, in this marathon. Not to mention sponsors, such as Groupon.

All you have to do to win is take a photo of you wearing your racing bib and pretending to run this marathon and then tweet it to the world.

If you believe this, then I have a Tree Octopus to sell you.