In the early days of Milestone Sports, the three co-founders were talking about when they should buy new running shoes. None of them had a quantifiable measure for knowing the exact time. So they set out to create an easy and inexpensive shoe odometer. Soon, the idea expanded to include gait and performance metrics. And with that, Milestone Sports was born.

Several years and one revolutionary product later, others are starting to benefit from that first conversation. Meet Yosh… Yosh Schulman, from Northampton, MA, began running with a Pod one year ago today and has tracked more than 1,300 miles across four consecutive pairs of Saucony Rides, which he changed every 300 miles. Recently, Yosh asked Milestone Sports for an excel report on all of his data from the past year. He wanted to see if he could extend the life of his shoes while still running safely. Yosh wrote, “Right now, my biggest consumable cost (aside from race registration) is shoes, so if I can either justify my shoe purchases or curb my shoe purchases, I will feel this data is not just good for my training, but good for my wallet.” We pulled his report. [Ed. Note: We thought an export of the Run Log was such a great idea, we added it to the App in August 2016. Here’s how: Menu > Settings > Export to Excel. You will get a file delivered to your email is seconds.] We looked at his data too. We found that Yosh’s rate of impact started to climb with his mileage and that his 300-mile shoe changes were coming just after his rate of impact started to increase.  This perfectly timed change helped reduce his injury risk. 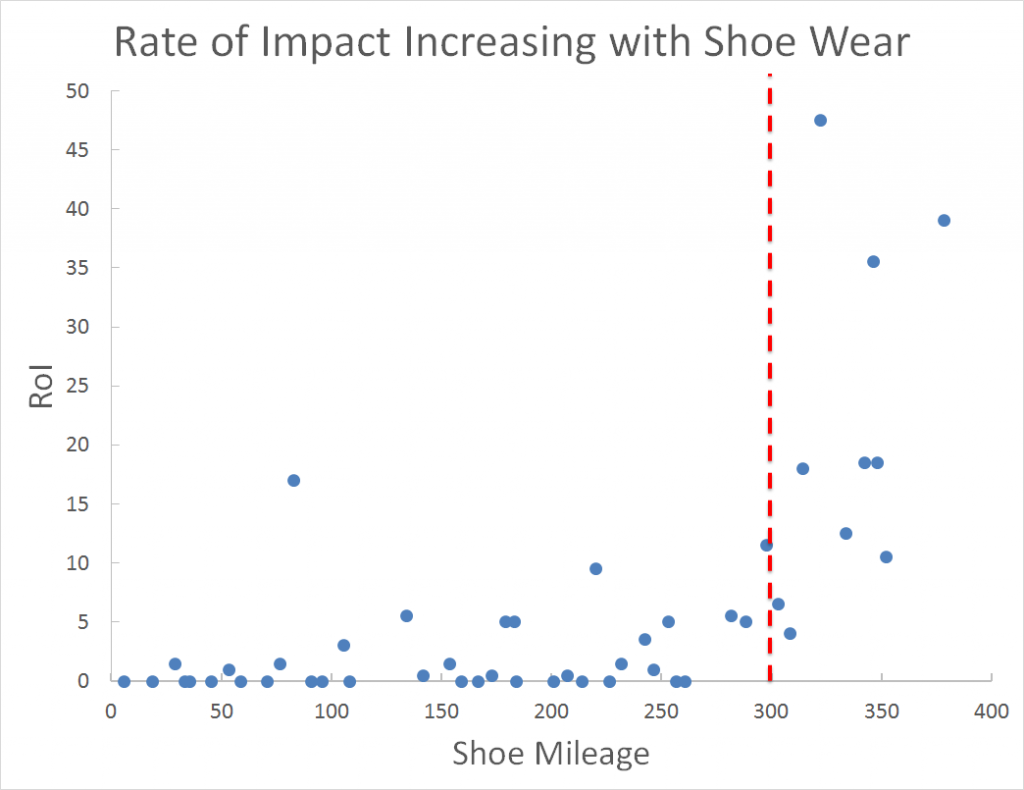 “I am totally floored, impressed, and delighted by this data,” said Yosh. “The rate of impact factor was exactly where I was trying to get to.  As a data guy, it boosts my confidence to see tangible numbers confirming my personal experience. I am also understanding more about shoe mechanics. This past year was my first injury-free year and now I’m ready to up my game.” Once shoes begin to break down, their cushioning properties weaken and could cause greater impact on the body. With today’s modern foams, runners can no longer depend on seeing “wear” on their shoe’s midsole. Don’t wait until body pain tells you to change shoes. Let the MilestonePod do all the work for you. So, take it from Yosh. Knowing when to change your shoes matters. It might even be good for your wallet too!