The Men's Race: Meb Keflizighi Ends a 31-Year Drought in a Thrilling Race

The last time an American stood atop the podium, Ronald Reagan was president. “Come on Eileen” by Dexy's Midnight Runners and “Beat It” by Michael Jackson were at the top of the charts, and Nintendo had recently released the original Nintendo Entertainment System.

It was 1983, and Greg Meyer was last American Champion of the Boston Marathon… until today.

Meb Keflezighi was an improbable champion. A 38-year-old seasoned veteran of distance running, Meb is somewhat of a patriarch amid a rising tide of seemingly unbeatable East African talent—particularly when it comes to the marathon. Sure, he's had memorable races. He picked up the silver medal for the U.S. in the 2004 Olympic Marathon and he won the NYC Marathon in 2009, shocking the field. Yet, for the past three years, Meb's career has been shaky. Nike dropped him as a sponsored athlete in 2011, and he searched for a new sponsor until Skechers picked him up in 2012. He placed 4th in the 2012 Olympic Marathon—undoubtedly, an impressive performance—but if one is not on the medal podium, his or her race is soon forgotten.

Thirty-eight years old is, by no means, “too old” for the marathon. Ethiopia's Haile Gebreselassie ran a 2:03:59 at the Berlin Marathon when he was 35; setting both the world record and the first incidence of a marathoner breaking the 2 hour, 4 minute barrier. However, at Meb's age, raw speed is not at its peak and is necessary to keep pace with the world's best. In an interview earlier this year, he mentioned that he had not been able to complete the speed work that he wanted. Even to himself, his fitness level for this year's Boston Marathon may have been questionable.

His successes have only occurred periodically and somewhat metronomically. Every 2-3 years or so, his name would resurface.

Yet, when Meb surged ahead of the lead pack at about Mile 8, he was convincing. He looked ready to quell the opinions of the doubters. He seemed adamant on making history.

When Meb surged to the lead, he was joined only by Josphat Boit. By the half-marathon marker, the leading duo had amassed a 38-second lead. At about Mile 15, Meb began to fly solo. He seized the lead and pushed the pace. Surprisingly, no one from the chase pack (despite the highly formidable talent) attempted to respond. When Meb had reached the 30-kilometer mark, he had a 50-second lead.

Traditionally, when a runner takes a lead so boldly in the early stages of the race, it is assumed he will not only be challenged, but also surpassed before the finish line, unless, of course, the leader is a dominant talent.

No one would have pegged the aging American as a “dominant talent.”

Lo and behold, after Mile 22, Meb began to feel the pressure. Kenyans Wilson Chebet and Frankline Chepkwony had begun to eat away at Meb's lead at an alarming rate. In a matter of a few miles, the challengers had cut the American's lead from 50 seconds to a mere 10 a seconds. Meb was looking over his shoulder. Marathon history would suggest that the drought of an American victory at Boston would continue.

However, in true Boston Strong fashion, a fatiguing Meb staved off Chebet (2nd) and Chepkwony (3rd), both of whom have faster marathon PRs than Meb. He won in 2:08:37, only 11 and 13 seconds ahead of Chebet and Chepkwony, respectively. In the realm of marathoning, that's a very close race.

Be it a close race or not, a win is a win. And for the first time in three decades, the Star-Spangled Banner was played proudly during the awards ceremony.


What Meb used in Boston:

Garmin Forerunner 620: This Cadillac of GPS watches and heart rate monitors seems like an obvious choice for an elite athlete. The Garmin Forerunner 620 sets pace alerts, time/distance alerts, recovery times and so much more -- it's the closest thing to having your coach in your pocket. The hi-resolution, color display is easy to read and, even though it's packed full of features, it's still easy to use. 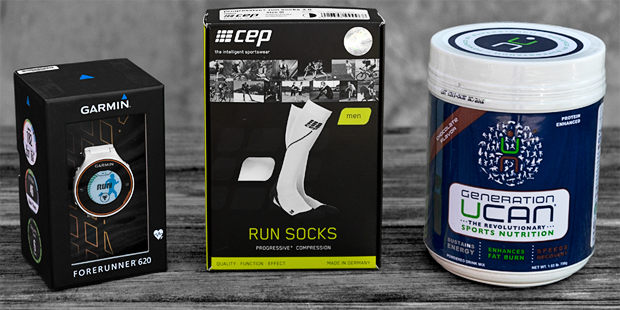 The women's race was equally as exciting, as U.S. distance running icon Shalane Flanagan—a New England native—set an aggressive pace from the gun. The leaders held on to5:20 pace (minutes per mile) and reached the halfway point in 1:09:27, approximately a minute faster than Margaret Okayo's half marathon split during her course record (2:20:43) run in 2002.

Flanagan, America's best hope to finish in the top three, bravely led the top runners for an hour and 45 minutes before losing steam. She dropped off quickly from the lead pack of about six runners, from which 2013 Champion Priscah Jeptoo of Kenya quickly emerged as the pace setter.

It was a matter of time before Jeptoo left the field in her dust. She clicked off an incredible 4:47 mile split through Mile 24 and never turned back. Her blisteringly fast surge brought her to the finish line in 2:18:57, a new course record by almost two minutes. Displaying incredible poise and brilliant tactics, her first half marathon split almost matched that of her second half marathon. This was Jeptoo's third Boston victory.

A beleaguered Shalane Flanagan faded to 7th place in a time of 2:22:02, a very impressive time despite struggling during the last 8 miles. Fellow American Desi Linden finished 10th, clocking a time of 2:23:54. To put it in perspective, When Rita Jeptoo won last year, her time was 2:26:25.

The last time an American woman won the Boston Marathon was in 1985, when Lisa Larsen-Weidenbach finished atop the podium.

Despite the tragedy that occurred during last year's race, the city of Boston has proven its strength and resilience. The race accommodated the largest race population it has ever seen and the city of Boston lined the race in droves to bring energy and support to the greatest road race in the world.

There could not have been a better year for an American to win the race. Meb's tenacity and boldness reflected the very same traits that it took the event officials to rebound from last year's devastation and to ensure that this year's event was the safest and most compelling yet.

The American women showed no less courage. While there may have been no Americans in the top 3, it was Shalane Flanagan's drive and conviction that elevated her to a personal best time but also four other women to new heights—one of whom now holds the course record.