Suunto is one of the coolest sport watches around. Complete with built-in altimeter, barometer and compass, the Suunto Vector is perfect for almost any outdoor activity.

In 1936, Finnish orienteer Tuomas Vohlonen founded Suunto. (For those of you who don't know, orienteering refers to sports which require navigational skills and using a map and compass to navigate through diverse terrain.) Just in case you were thinking that orienteering doesn't qualify you to make world-class GPS & sport watches, Vohlonen was also the inventor of the liquid-filled field compass. Suunto is based in Vantaa, Finland.

Not only are Suunto's extremely hi-tech, durable and pretty much perfect for whatever activity you want to do, they are very, very cool looking. So cool, that Suunto watches have been spotted in a variety of movies and TV shows.

SUUNTO IN THE MOVIES

Clockstoppers (2002) was a sci-fi movie for tweens. In the movie the NSA is developing some top-secret techonology called HyperTime. Hypertime speeds up the user's molecules so much that the rest of the world appears to be standing still. This world-changing and potentially dangerous tech can, of course, fit into a wrist watch, which, of course, is found by one of the scientists sons. As you can imagine there are pitfalls to using Hypertime, chases, dangers, Einstein and more. Oh, the watch that the entire movie is about? A yellow Vector Suunto.

Alien vs Predator aka AVP (2004) was another sci-fi movie, albeit a bit more grown up than Clockstoppers. A mysterious heat source, an oddly grouped team of archaeologists, linguists, drillers, mercenaries, and, oh yes, one guide, plus a super-rich guy footing the bill… I know, this sounds like the beginning of an entire genre of movies. If I was compiling a team to head off into some long forgotten middle-of-nowhere island with a weird "heat bloom" I’d sure as hell bring a few less linguists and a few more mercenaries. Oh, and I’d definitely bring more than one guide. Anyway, the humans head to the heat source as do the Predators. There’s a mysterious pyramid and human skeletons. And now the fun starts. The Predators arrive and start killing, a structure is accidentally powered up, and the Alien queen wakes up and starts lying eggs which hatch amazingly fast. And, the Suunto X6HR is featured.

The Hurt Locker (2008) was a phenomenal film. It was nominated for nine Academy Awards and won six, including Best Picture, Best Director and Best Screenplay. It's about a reckless bomb tech during the Iraq war... and in the movie Contractor Team Leader (Ralph Fiennes) wears a Suunto X10.

127 Hours (2010) is based on a true story about the mountain climber/hiker Aron Ralston who got trapped in a ravine by a falling rock and had to cut his own arm off to survive. On that arm... a Suunto yellow Vector. James Franco played Aron Ralston and did a fantastic job. He spends a lot of time on screen alone trapped by the rock. It sounds like it could get boring; however, this movie is anything but, and the Suunto gets prominent placement.

In the movie Shooter (2007), Mark Wahlberg plays a marksman who comes out of retirement when he learns about a plot to kill the President. A bunch of double-crossing ensues and while Wahlberg is tracking down the real killer, he wears a Suunto Vector. 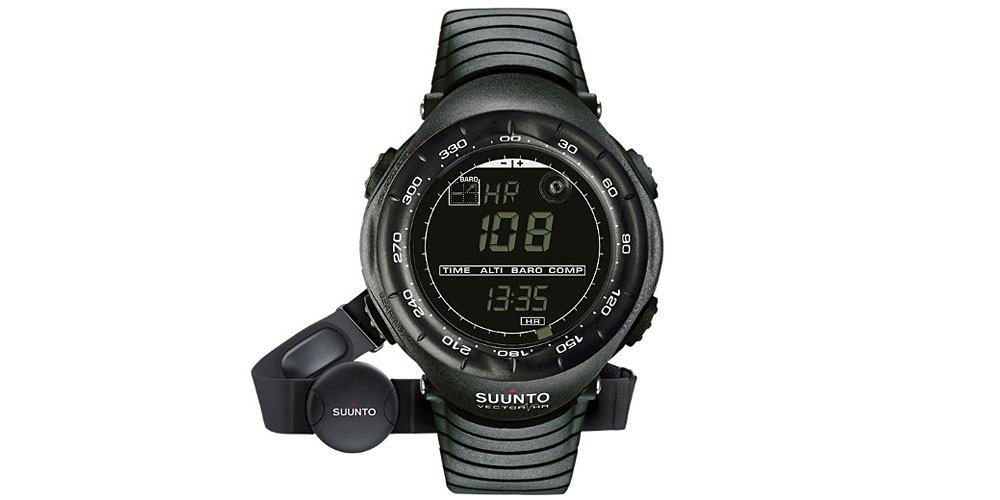 The Suunto Vector has shown up on all kinds of TV shows, from Stargate Atlantis and Stargate SG-1, where the entire teams wear Vectors to The Big Bang Theory where the character Zack sports a Suunto Vector. In the TV Series Supernatural both main characters, Sam and Dean Winchester (Jared Padalecki and Jensen Ackles) wear Suunto Vector watches while they battle demons and save the world. And, in NCIS: Los Angeles Special Agent Sam Hanny (LL Cool J) wears a Suunto Vector to help him fight crime.

So, if you're looking for a GPS watch that truly goes the distance and is cool enough to be featured in some great movies and TV shows, check out Suunto. Even if you don't care about movies the extra built-in features will be more than enough to sway you. In fact, the website www.endoftimesurvival.com lists the Suunto Core as a must-have to survive a zombie apocalypse. As they say, "If you are fleeing a zombie outbreak, altitude, barometric pressure, sunrise/sunset times, and your magnetic bearing are all important things to know. The Suunto Core provides all of this information in one device. Its impractical to carry a compass, altimeter, depth gauge, and barometer with you everywhere. You would need a small kit bag for all these devices. Instead wear a watch that incorporates all of them. The Suunto Core will provide you the info you need to survive and is a must have for zombie survival."

Just in case you aren't worried about zombies, they go on to say that it doesn't look out of place with regular clothing and it's great for camping, skydiving, mountaineering and predicting storm fronts.

See? You can't go wrong. Perfect for surviving the zombie apocalypse and looks good with regular clothing. Could you really ask for more?