Welcome back to our Fitness Fire Storyteller series! This week our guest storyteller is Becky of the blog Run Becky Run. Becky ran her first 5K (without walking) nearly a decade ago and has since worked her way to competing in 10Ks, marathons, and even a 50K! Here are a few of her thoughts on cold-weather running. 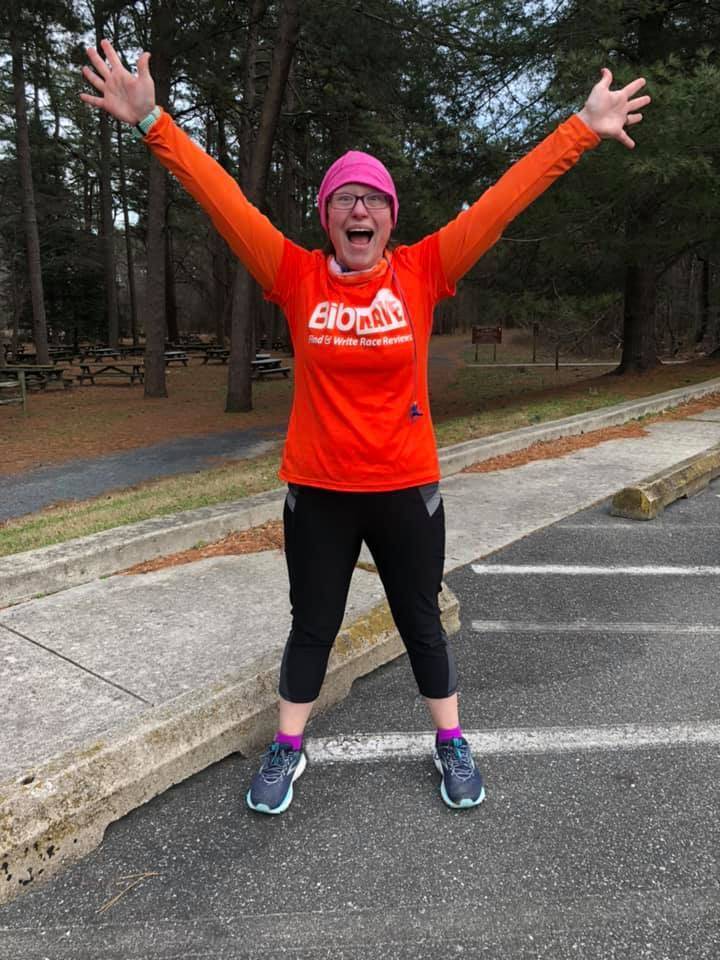 As 2019 came to a close and we approached a new decade, I found myself frantically calculating (daily isn’t obsessive, right?!) how many miles I needed to reach my yearly goal and whether or not I should add one final race to my calendar. My goal seemed fairly doable, but it still required a fair amount of effort to reach, especially during the darker winter months. It can be difficult to get out the door in the morning at zero dark thirty, leaving the cozy cocoon of my bed with two kittens curled around my legs.

Oh, who am I kidding? I’ve never been much of a morning runner, so the thought of catapulting onto the wood floor to get going in the morning sends shivers up my spine. I’d much rather be realistic and run during a lunch break or on a weekend if my schedule allows. I applaud early-morning runners immensely, but it’s just not my modus operandi.

Once I acknowledged my aversion to morning running some years back, I quickly realized that I had another hurdle to climb—frigid temps in the winter months. You see, I grew up in New England, so I’ve carried around this persona practically since birth that the cold doesn’t affect me. I’m not quite the “I-wear-shorts-in-three-feet-of-snow” offender, but I have been known to wear OOFOS in December (and not the OOFOS Oomg Boot variety!).

Since moving to Delaware in 2011, I felt like I needed to wear a winter warrior badge of honor, because a few inches of snow seem to debilitate the state (love ya, Delawareans!). I knew I needed to suck it up and get real with myself.

So after I let my cool-chill attitude melt, I decided to see what I could do about cold-weather running. I’ve attended a few frigid races and observed fellow runners to see how they’ve chosen to combat the cold. There’s no magical secret to running in cold weather except mustering up a good dose of courage, with a few helpful tips.

I’ve run segments of a free trail 50K locally for several years now. I say parts of it because I’ve been unable to complete the full course due to toddler-birthday-party commitments or other life events—that is up until this January 2019, when I finally reached my goal of completing the whole 50K.

The race is self-supported, and I’ve picked up several tidbits from more seasoned trail runners over the years. The first is to layer, layer, layer. Keep your body as warm as possible before you start running, and try to regulate your temperature as much as possible during your run. The best way I’ve found to do that is to wear several layers that strategically cover different parts of your body.

It’s no fun focusing on freezing fingers or toes during a run, so smarten up and protect them properly. Here are a few products to check out:

Whether you’re running in the wee morning hours or in the evening, you’re going to want to be visible to cars and foot traffic. Here are just a few of your many options to choose from:

Staying hydrated this time of year is no joke. I try to juggle my coffee consumption with water, but sometimes it’s difficult to stay ahead of the hydration game. Before I know it, my lips are chapped, I have a headache, and I even get muscle cramps. To not fall into this trap, try out some of these products:

Set a treat for yourself at the end of your run, training cycle, or year! These can range from grabbing a cup of coffee with a friend at a local café post-run, or something larger like a new pair of shoes. I myself am drooling over the Brooks Ghost 12 Flannel Pack! At Holabird Sports, we know how frustrating it can be when you’re injured and unable to do what you enjoy. That’s why
Read More What to Wear for Winter Runs: Recommendations by Temperature

Figuring out what to wear in cold conditions can be confusing and time consuming. Our dedicated team of runners and prod
Read More